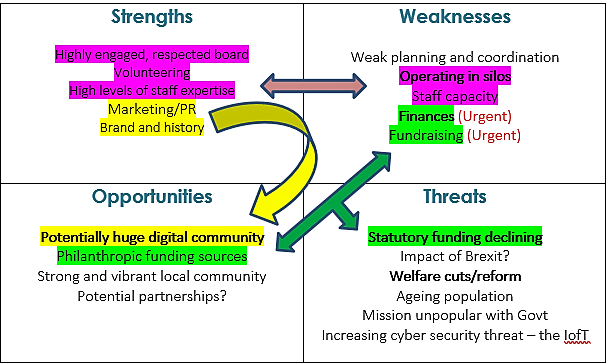 The immediate threats are well known and others are on the horizon, which we must identify and respond to, but, there will be opportunities too, for those who find and exploit them. This toolkit enables you to do that, using a 3 stage process, to respond to the crisis. You can download it in toolkit form, with its additional tools, from the strategy questionnaire. Charity COVID19 Toolkit 1 of 6.

How Use Your SWOT Analysis

Bring your Strengths and Weaknesses together with you Opportunities and Threats to create your SWOT analysis. If you wish to, you could identify those that are particularly important or urgent. Then use this to create your strategy.   Watch this Charity Excellence ‘How To’ video (3 mins) for how to do your SWOT really well.

This image at the top is an example, which highlights those that are particularly important, or urgent.  The arrows show linkages that can be used to create a strategy; using strengths to exploit opportunities, and/or to address weakness, and/or to mitigate/avoid threats. Or better still, could you turn a threat into an opportunity?

These are the S and W in your SWOT.  If you’re a trustee, download the CEF Board Bingo game for your next meeting to find out what yours are.

We’re usually feel able to identify our strengths, but it’s always worth thinking through this.

Write down every strength you can think of, then test each in turn by asking yourself what measurable evidence do we have that demonstrates that to be the case?  Identify the key ones.

Even the very best amongst us have weaknesses, but many find identifying these the most difficult aspect of strategy.  But, these are usually the best opportunities we have to achieve more.

Sector Weaknesses - The CEF Data Store aggregates all user data anonymously to create Big Data for the sector.  The metrics at amber are strategy, fundraising, communications, sustainability and how realistic we are in our planning and target setting.  That is the majority of charities do not do these well.  Are you one of them?

Challenges - We have fantastic people, but people are often resistant to change and talking about ‘weaknesses’ almost always makes people react defensively.  I find that approaching this as looking for opportunities to achieve even more helps.

These are the O and T in your SWOT. What the threats and opportunities may be for your organisation, depend on a range of factors specific to you and may appear at global, national, regional or even local level.

You need to be looking outwards to identify, and then assess and respond to these. Think through what the issues above may mean for your charity.

Strategy is about making the best decision you are able to, based on the best evidence you have.  It doesn’t have to be complicated, but you do need to have a logical, structured process, challenge positively, be prepared to think about new ways of doing things, take people with you and make decisions based on the available evidence.

We cannot control the events in the outside world, so effective strategy isn’t about deciding what we want to do, but rather understanding how that may impact your work, and focussing our resources to exploit the opportunities and mitigate the threats facing us.

PART 3 - How To Create Your Recovery Strategy

There isn’t enough funding and there isn’t going to be.  Boards that act strategically to the emerging threats and opportunities, will be far more able to mitigate risk, and find new ways of working to increase their impact and use resources more effectively.

Others may be specific to certain charity sectors or even individual charities.

Others will be specific to us.

Creating Something Good From Tragedy

Some good may come from awful events and factors may coincide, creating greater opportunity.

COVID19 is already creating huge changes, some of which will change the way we work in the future.

There are issues that may have huge impact longer term, or not, which may be very important.

But, more than that, a crisis is a catalyst for new ideas and better ways of doing things.  New opportunities will appear.  Those that succeed will be actively looking to find these and how others are exploiting them, to create or adapt this, to deliver more for their own charities.

In recent years, social media went from online chat for young people to fundamentally changing  society in ways that no-one ever envisaged.  The charity sector was very slow to respond, but those that did were far more able to take advantage of this and much better prepared for the virus.

COVID19 will also fundamentally change the world in ways we don’t yet know.

The CEF Data Store shows that strategy is an area of weakness.  There is huge uncertainty, and the scale and nature of the emerging risks will vary from charity to charity.

We need to be looking outwards to identify these and respond to minimise the impact.

What Do We Need To Think About?

Competition for COVID19 funding is already fierce, but competition for funding will almost certainly increase further in the coming year, potentially very significantly.

The number of people giving to charity is at its lowest for a decade, but within that there are some positive signs.

My own (very crude) estimate is that about £2bn in emergency funding has been made available to the sector. Based on the COVID19 funder database data, the allocation of that funding has mainly been focused on the front line in areas, such as vulnerable and older people, and food banks. Funding for BAME groups was initially very limited, but latterly substantially increased. Funding for other charities, such as animals and the environment, has been limited, as has funding for UK based international charities.

More positively, funders have been very flexible and quite a lot of the funding provided has been core funding, including funding to adapt services and meet funding shortfalls.  Funders have been much more open to funding non-profits that are not registered charities.

The number of charity closures quadrupled during the 2008 recession, even though charitable funders increased grant making in response.  They’ve already provided substantial COVID19 funding and some of that has been repurposed, so will not now be available for its originally intended purpose.  Finding even more seems unlikely and the difficult years since 2008 have made charities much less resilient than they were then.

In June, Pro Bono Economics estimated that the gap will be £10 billion over the next 6 months, the IoF/CFG that there will be a £12.4 billion shortfall in income this year and, in a DSC survey, over half of charities reported that they expected to be insolvent within 6 months.

Brexit - negotiations are likely to be fractious, creating even more economic uncertainty. Hopefully, there will be clarity by year end.  An LSE report (July 2020) found that Brexit will deliver a double shock to the economy, whether we secure a deal with the EU or not.

Some Brexit risks will be specific to certain charities, such as staffing, funding, data protection, import/export, tax and regulation. The £ billions in EU grant funding, in areas, such as education and research, may be at risk for others. The majority of the Charity Excellence Brexit preparedness indicators are at amber, indicating that many charities are not yet ready to respond to this.

Global - more widely, the pre-COVID global economic risks remain, such as the growing impact of climate change, more belligerant stance by China to many countries  and the continuing US/China trade war.  The US elections at year-end 2020 may well impact on global markets.

Based on the COVID19 funder database data, the announcement of new emergency funding appears to be tapering off. Looking forward, COVID19 funding will be increasingly used up, reserves depleted and, from August, charities will be required to increasingly fund furloughed staff, with the scheme ending 31 October. Some 160,000 charity staff had been furloughed by the end of May.

This seems likely to be the crunch point for the sector, with increasing numbers of redundancies. Some large charities have begun announcing significant redundancies already.  That will not only impact morale and delivery, but also cost money we don’t have. We are likely to see increasing numbers of restructures and mergers, but doing so is not without risk, can be expensive and the benefits usually take time to deliver.

The UK has suffered the worst economic damage from the crisis, of any country in the developed world.  Economic recovery will almost certainly be top of the Government’s priorities during recovery, which may help some, but might also negatively impact other areas of the sector.  For example, the merger of DfID and its £14 billion budget with the FCO, has the potential to subordinate aid for the poorest to our political interests and, in doing so, poses a real risk to the work of our IDO charities.

The £750m made available to the sector was focused on the front line.  Here’s how it was distributed and to whom.  The NHS, social care and education may well be high priorities. Elsewhere, a really tough focus on making cost savings seems likely, not only potentially impacting funding for the sector, but also increasing demand for services. The Government has launched a comprehensive spending review, to be published in the autumn.

How To Use This Toolkit

The immediate threats are well known and others are on the horizon, which we must identify and respond to, but, there will be opportunities too, for those who find and exploit them.  This toolkit enables you to do that.  It is updated on an ongoing basis. This is version 3, 27 July.  The toolkit is in 3 parts.

You can download the latest version from the CEF.

The Charity Excellence Data Store strategy indicator is at amber, showing that the majority of charities do not do this well.  To get maximum benefit from using this toolkit and to access the CEF’s  wide range of strategy tools, complete the CEF Strategy questionnaire before you begin. It takes 2 mins to register here and 30 mins to complete the strategy health check; everything is free.

The outlook for charities is bleak, the funding gap will be huge, and cost cutting can be a race to the bottom, and often is.  The Charity Excellence Framework provides everything you need, in one place, to enable you to not only survive, but also emerge from the crisis a stronger and more effective charity; everything is free.

Here's another article you may find useful:

How To Make Strategy Effective

The future is bleak, but not without hope, for those willing to find and exploit the emerging risks.

However, strategy isn’t a plan, it’s what an organisation does and that involves everybody, ideally from the outset.  It’s important to engage people and turn your plan into the timetable, budgets and  actions needed for them to deliver it and your progress to be monitored.

Whatever you do, don’t do nothing.

“ The questions are phrased brilliantly - challenging how we prioritise our management time." Ecosystems Knowledge Network