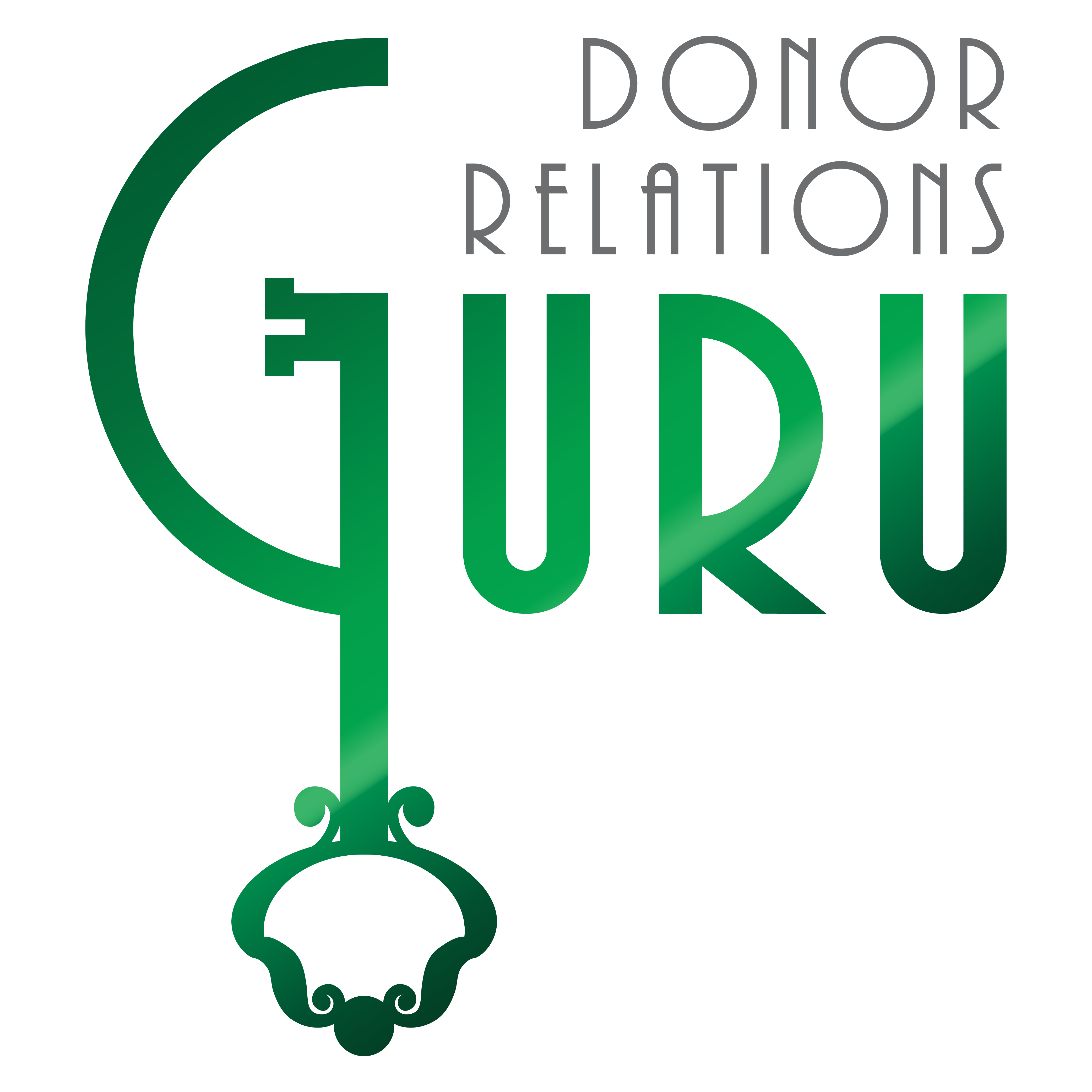 Fundraising donor relationship management includes engagement, stewardship, acknowledgement & recognition and may seem a black art. However, it isn't, we all do it and doing it well is a huge opportunity to increase your funding. It can range from the application of sophisticated techniques, through to simply doing a donation thank you letter well. This resource is an introduction, with links to more advanced resources, an upcoming free webinar in June and a conference in July.

These are all buzzwords?  Fundraising donor relationship management, engagement, stewardship, acknowledgment and recognition and a black art only for fundraising professionals in major charities?  Nope.  If you're a chair, or senior or fundraising management you're already doing it, even if you don't know you are. In tough times, it's critical to maximising your fundraising income, but because many don't understand it well, they're losing out.  If you're already a donor stewardship ninja, but your team/board don't really get it, this article will help you to win them over.

It demystifies donor management, gives you tips and tricks anyone can use, links to more resources, plus a free webinar and a conference.  It's primarily aimed at major donors and gifts, but the principles apply to all donors, because they should all be valued.  Many charities have already moved their fundraising strategy from primarily acquisition and much more to retention to exploit that.  Don't get left behind.

I'm not an expert, so I've partnered with Lynne Wester, the donor relations guru, who is. She'll be hosting a conference in London on 18 and 19 July.  To find out more and to register - click here.  I've inserted links to a few of her blogs into the sections below, plus a couple of my own.

Why Managing Donor Relationships Really Will Increase Your Fundraising Income

Many boards seem to think the solution to securing more funding is to get more bids out/asks in, but donors will not give if they're not engaged, no matter how many asks you make. If I'm working with a new board and need to convince them, I usually hold my hand out to a random trustee and ask him/her to give me £50 (£100 would be better tbh). That's usually quite embarrassing for everyone. Well, not me obviously, I'm Scottish but, sadly, no one's ever actually given me £50.  It doesn't work with donors either, but too often all we see is the money, not the person and nobody likes to be treated as if they were a cash machine.

Raising funds has become much tougher in the last year and, even if you're still managing to recruit new donors, if you're losing existing ones at the same rate, that doesn't feel like success.

The good news is that there's more bad news. Donor relationship management is at amber in the Charity Excellence Sector Data Store. That is the majority of charities report they are not doing this well.  That makes it an opportunity and this blog and follow-on resources will help you exploit that to raise more funding.  And if that feels like even more work, it takes less time and effort to retain and grow an existing donor than it does to onboard a new one.

And there's more good bad news.  I know that many trustees think that fundraising is the fundraising team's problem, but that's also an opportunity for you.  Many trustees don't appreciate that they have statutory obligations for fundraising and it doesn't have to be about making a donation or ask.  They may feel more comfortable in agreeing to support stewardship activities. Here are 20+ ideas to engage trustees in fundraising from Charity Excellence, including ideas on how they can help you steward your donors.  Take the ones you like and table these at your next board meeting and/or include them in your trustee induction.

Self-excluded, asking for money can be quite difficult for some people, so I usually explain that fundraising isn't about asking for money, but rather about helping someone to do what they want to do. People give, give more and keep giving because they care and because they want to make a difference. That's why me randomly asking someone I've never met for £50 doesn't work. How could we do that? The answer is, don't immediately dive in with a passionate pitch for your charity. Instead, ask questions and listen, and once you know what's important to a prospective donor and you know more about their motivations, offer them some options they'd really like. You'll be more likely to get the donation and, even if you don't, you might get some introductions, or promoted within their company, or an opportunity to speak, or pro bono, or ....... As Epictetus, the Greek philosopher said, we have two ears and one mouth so that we can listen twice as much as we speak.

The fundraisers don't always like it, but I often describe that as similar to basic sales techniques. If you walk into a shop and the salesman tries to sell you a blue dress, the chances of a sale are pretty slim. So, what he/she does is asks what you're interested in. If you say a dress for a party, he/she'll ask you what you like. If you say a little black number that'll make every woman in the room grind her teeth with envy, he'll show you the latest achingly cool collection and offer you a range of options, then explain the benefits to you of buying one. Fundraising isn't that different, except that what you're selling is intangible and for the good of others, not commission.

To take my analogy a step further, those shops that make you want to go back again and again, because they look after you and make you feel valued - that's the commercial version of donor stewardship. Why sell you one dress, when they can make a lot more money by keeping you as a customer long term? But too often efforts to engage a donor fall off once we've secured the donation. That's a mistake and those who don't maintain this are losing out. To make sure you don't, read on.

Donor stewardship is about ensuring a donor is kept informed about how their donation has been used and you are accountable and transparent in how you do that. Some donations (usually grants) have specific reporting requirements, deadlines and objectives. The absolute minimum is to meet these obligations, but don't make it an afterthought. Write these well and make them interesting and emotionally engaging; imagery is good. You're not just ticking boxes but making sure the donor feels valued.

Other funders may simply make a donation and trust you to use it well. That doesn't remove the obligation to keep them informed and you need also to repay that trust. To do that, listen to them and give them what they'd find interesting and make them feel valued. That might be catch-up meetings or calls with your CEO, visits to the new project and/or an end of project report. I usually include insider information, such as new plans and ideas we're exploring. I'm Scottish and they might just .......

And donors give, because they want to make a difference, so communicating your impact is really important.  Try donor recognition versus impact - which is more important?  Or how to create the ultimate impact report.  And if you want a practical step-by-step guide and toolkit for measuring and reporting impact, try this Charity Excellence resource.

Donor acknowledgement may be as simple as sending a receipt, or thank you letter, or may include signing a formal agreement and/or the involvement of the leadership team.  For any significant donation or grant, I've always signed the thank you letter and often hand written these.  If appropriate, I've also sent a draft e mail to the chair so that he or she can also send a note of thanks.  Here are acknowledgment examples and '5 must dos'.

On occasion, I've been astonished by professional fundraisers who've objected to this. The reason I do is that the CEO's signature at the bottom helps to send the message that the donor is important to us and valued.  Never forget that it's not about what we want personally - it's our donors who make our work possible and (coincidentally) pay our wages.  Or to make sure that the person who actually wrote the application gets full credit for having done so.

In some charities donor acknowledgement and recognition may be treated as the same, but you can also see acknowledgement to the donor personally and public recognition are different. Not all donors wish to have their donation made public but, if they do, it's an opportunity to also raise your profile and, perhaps, encourage others.

Traditionally, recognition has been naming something after the donor, or a plaque, more commonly a thank you in your annual report. However, with the advent of social media and new technologies, there are now opportunities to be a lot more innovative and it can also be a lot more affordable.

I know that we aim to build overall engagement with newsletters, social media, events, dinners, meetings etc, but these are often carried out for a variety of reasons and not always with clarity on why. To increase your funding start by thinking about your lapsed, existing and prospective donors. Who are they, how important they might be, what they want and value and what you can offer them that delivers on that?  It doesn't have to be a major exercise, but you do need to do it to secure more funding.  For more on questions to ask yourself when planning your events, try this and for how to evaluate your events programme, this. Here are some ideas on doing events differently.  For smaller charities, here's a Charity Excellence events planning checklist.

What donors want is information, access and experiences. Make them feel valued by showing them the difference their funding makes and making then feel part of your community. Use your newsletters, events and open days as a way of giving them that. For significant donors, treat them as valued partners. For example, making them aware of new projects or plans before they read about these in the newsletter. Give them access to the chair or CEO, the opportunity to meet beneficiaries and experiences money can't buy.

That's not as difficult as it might sound.  What's normal day-to-day work to you is something others never see and your donors really value your work. How about a behind the scenes tour of your foodbank with the CEO, or visiting your facility with the chair and meeting someone who has just adopted a rescue dog, or meeting your volunteer team and hearing about the difference they make to people's lives?

Lynne will deliver and interactive learning experience perfect for those who are new to donor relations and the experienced professional.  Filled with fresh content and real-life examples, this conference will teach you the basics of donor relations as well as next practices and new industry trends.

The first day will be dedicated to the Four Pillars of Donor Relations—acknowledgment, stewardship, recognition, and engagement. Lynne and her team will bring each topic to life as they share personal stories of tragedies, triumph, ridicule, and redemption.  Day two dives into behaviour-based donor relations—a next practice in donor relations that allows us to provide more meaningful, donor-centred programming based on behaviours rather than giving amounts.

You can find out more and register here. ​

“ The questions are phrased brilliantly - challenging how we prioritise our management time." Ecosystems Knowledge Network